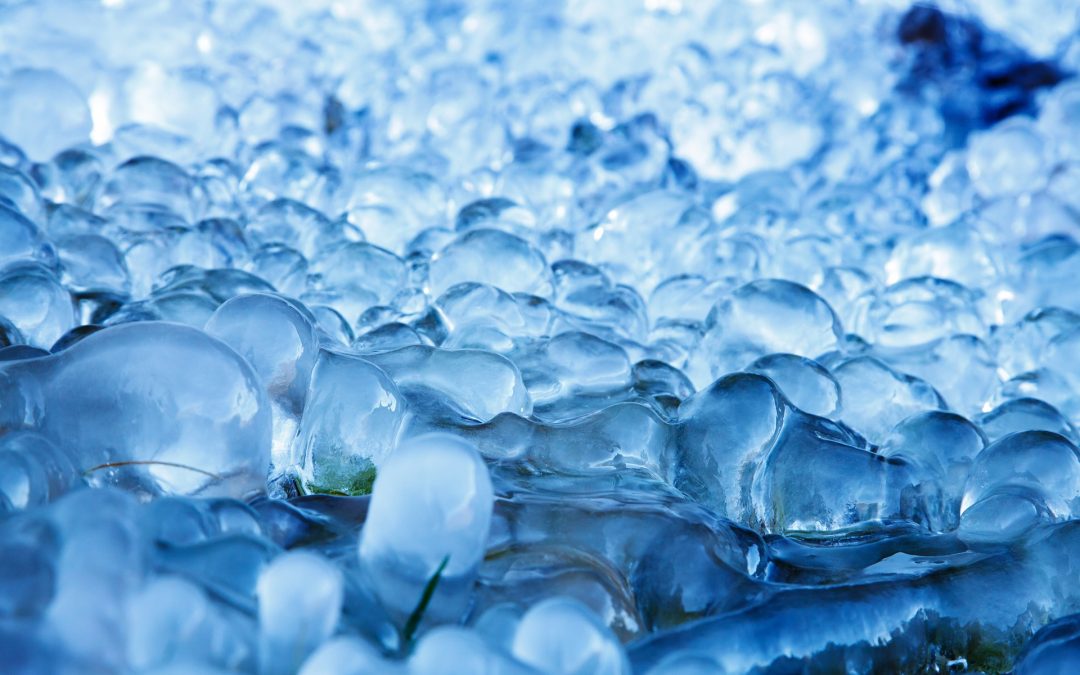 Ice is water frozen into a solid state. Depending on the presence of impurities such as particles of soil or bubbles of air, it can appear transparent or a more or less opaque bluish-white color.

In the Solar System, ice is abundant and occurs naturally from as close to the Sun as Mercury to as far away as the Oort cloud objects. Beyond the Solar System, it occurs as interstellar ice. It is abundant on Earth’s surface – particularly in the polar regions and above the snow line – and, as a common form of precipitation and deposition, plays a key role in Earth’s water cycle and climate. It falls as snowflakes and hail or occurs as frost, icicles or ice spikes.

Ice molecules can exhibit seventeen or more different phases (packing geometries) that depend on temperature and pressure. When water is cooled rapidly (quenching), up to three different types of amorphous ice can form depending on the history of its pressure and temperature. When cooled slowly correlated proton tunneling occurs below 20 K giving rise to macroscopic quantum phenomena. Virtually all the ice on Earth’s surface and in its atmosphere is of a hexagonalcrystalline structure denoted as ice Ih (spoken as “ice one h”) with minute traces of cubic ice denoted as ice Ic. The most common phase transition to ice Ih occurs when liquid water is cooled below 0°C (273.15K, 32°F) at standard atmospheric pressure. It may also be deposited directly by water vapor, as happens in the formation of frost. The transition from ice to water is melting and from ice directly to water vapor is sublimation.

Ice is used in a variety of ways, including cooling, winter sports and ice sculpture.